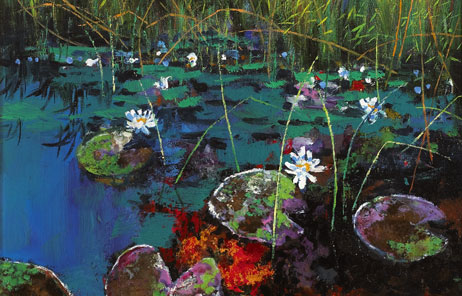 A retrospective exhibition with landscape artist Kenneth Webb. Kenneth will be joined by fellow artist Sara Sue McNeil, both of who will give a verbal tour of their work, especially works that relate to Derrigimlagh and the inspiration they both have derived from the location.

Derrigimlagh, a townland just outside Clifden, Connemara is the home of two inspirational events in early twentieth century human endeavour, the site of the first commercially viable transatlantic wireless station by Marconi and the landing of the first non-stop transatlantic flight in history by Alcock & Brown. As well as sparking transatlantic aviation and wireless communication, Derrigimlagh has continued to inspire many others in all sorts of ways.

Since the late 1950’s Kenneth Webb a landscape painter in the Romantic tradition, has painted Connemara and west of Ireland scenes which are now famous the world over. From his summer cottage at Derrigimlagh, Kenneth has taken much of the inspiration for work from his surroundings. The peatlands, wild flower meadows and ancient stones at Derrigimlagh contribute to a Gallic sense of mystery and mood in his Expressionist water lily and bog paintings of Connemara.

The Alcock & Brown Hotel, in the centre of Clifden has a long running exhibition of superb paintings by Kenneth Webb and Sara Sue McNeil. The Alcock & Brown 100 Festival are delighted to welcome Kenneth Webb and Sara Sue McNeill to give a retrospective exhibition of their paintings inspired by Derrigimlagh. Kenneth and Sue have just completed five paintings celebrating the centenary of Alcock and Browns first transatlantic flight. These paintings, depicting scenes from the great adventure, will be unveiled on this night and a very personal connection to the landing site will be explained.

Kenneth Webb is a British painter best known for his expressionistic, colorful, and thickly painted landscapes. He often takes inspiration from the scenes surrounding his home in Connemara, Ireland, and works in a style reminiscent of the palette knife paintings Maurice de Vlaminck. He has shown his work in numerous venues since the early 1950’s and has had solo exhibitions at the Kenny Gallery and the James Gallery, Dublin, every two years. He has exhibited with the Cork Arts Society, the Solomon Gallery, Dublin, the Oriel Gallery, Dublin and the Metropolis International Gallery d’Art, Geneva. He has also shown at the Belgrave Gallery, London and the Wren Gallery, Oxford. He has also regularly exhibited at the RWA.

Kenneth has recently had a major and very successful exhibition in the RDS Dublin. He also shows at the Gladwell & Patterson gallery in Knightsbridge, London. And of course his paintings of Waterlilies from Derrygimlagh have recently become an in demand art item in Beijing of all places! Clearly his art continues to bring images of Connemara’s great beauty to a worldwide audience.

Sara Sue McNeill is an Irish an Impressionist & Modern painter. Sara Sue has received various commissions for feature panels on public and private buildings including Bank of Ireland, Planards Limited, and John House London. She also has work in Private Collections in USA, France, England and Ireland. In 1978 Sara Sue the founded Ladybird Art Studio, in Donaghadee. Co Down, with a purpose-built studio facing the Irish Sea, where she provides professional training for painters in all media. She does demonstrations in oils, acrylic, watercolours and mixed media, to various art groups and societies throughout the Ireland. She has contributed to the City of Culture, Cork 2005, and has had a number of solo exhibitions with the Kenny Gallery, Galway, invited by ‘The Woman painters of Washington’ to exhibit in a millennium exhibition in Seattle and the Mall Gallery in London. Her works are also represented in the Trinity Gallery, Dublin.

A recent painting was purchased by the Zurich Insurance Company for their head office in Switzerland.

She was awarded a two-week residence course at the Tyrone Guthrie Centre.